Francesco Bennati, the 26-year-old among the greats at the En Primeur in Bordeaux with Qualità Club Selection

At school he was never top of the class, quite the contrary. He always preferred practice to university books. Yet today, at just 26 years of age, Francesco Bennati is among the handful of international négociants invited to Bordeaux En Primeur, as the soul and young, dynamic face of the Qualità Club Selection distribution company in Illasi, just outside Verona. A chair awaits him every spring, at the sound of the bell for the new vintages of Bordeaux Grand Crus. A circle of privileged people who are entrusted with 25% of the total value of Bordeaux wines, comprising just 4% of the total annual production (around 500 million bottles). Absolute excellence.

To think that Francesco Bennati, in Bordeaux, ended up there for the first time «in punishment». The Semaine des Primeurs, the week of tastings in which accredited merchants at the Place de Bordeaux taste and evaluate barrel samples of the best local châteaux – at least 18 months before they are put on the market – was long over. «I sent him to Bordeaux to pick grapes – his father, Carlo Bennati, proudly recounts -. School didn’t seem to be for him and, as a good rebellious teenager, he had no interest in working with me, in the wine and food trade company».

A FAMILY OF “PREDESTINED PEOPLE”

A very apt choice. Francesco Bennati made a name for himself in the vineyard, so much so that he was invited to take part in the vinification of the Pomerol châteaux to which he had been “sent” by his father. The first call to the prestigious En Primeur in Bordeaux came in 2019, thanks to word of mouth between vigneron and négociant that, on the one hand, is due to the merits of the young from Verona province, from a very young age “with his nose in the glass”. And, on the other, to the “good blood” of a family that, already with his father Carlo, had demonstrated great skill and reliability in marketing and selling the best Bordeaux wines in Italy.

The stories of father and son, Carlo and Francesco Bennati, seem to intersect and button each other, year after year, with sartorial precision. Outlining the contours of a bright future in common. As predestined. Carlo Bennati, 63 years old and worn with elegance and lightness, began his career at Qualità Club Selection as a warehouse worker. «I was paying my way through school», he explains from what has become the distribution headquarters over the years, in Località Campidello, 5. A beautiful property comprising offices, tasting room and shop, as well as a period building and a large warehouse. All surrounded by land and vineyards, straddling Soave and Valpolicella.

Today, Carlo Bennati is managing director and minority shareholder of Qualità Club Selection, which in 2022 celebrates the 40th anniversary of its foundation. To the South Tyrolean producer Klaus Lentsch the presidency and the task of continuing the project started in 1982 by the Lambrusco Grasparossa producer Massimo Gibellini (Tenuta Pederzana), commercial coordinator on behalf of the group of artisan and agricultural companies from Rieti for the distribution of wines and gastronomic specialities, both Italian and international. The presence of winegrowers in the governance of QCS is, in fact, one of the hallmarks of distribution in Illasi.

Over the years, the Valpolicella di Qualità Club Selection has “twinned” with Bordeaux, a wine-growing area that is now “turnkey” for Francesco Bennati. Soave has then met whites from Alto Adige, Moselle, Alsace and Burgenland, as well as Champagne, imported regularly since the 1990s. Spanish charcuterie and Cantabrian fish echoed Parma hams and Trentino trout. Rice from Verona called to Illasi the pasta from Gragnano. «We avoid large-scale distribution and online sales as a company policy – explain father and son – but we pay particular attention to multi-channel evolution, which is constantly developing».

A choice dictated by the fact that the Bennati family considers «the Bordeaux wine market to be “protected” from speculation that is instead affecting Champagne», which is in any case represented in the catalogue by Bauget-Jouette (Vallée De La Marne), Gaspard Crepaux (Cotê De Blanc), Lucien Lemaire (Vallée De La Marne), Roger Brun (Vallée De La Marne), Massin (Aube) and Jeeper (Montagne De Reims). The merit of this «protection» is precisely «the En Primeur system of Bordeaux, which allows access to the top of the range only to négociants, according to merit criteria based on sales and positioning of the labels in their reference market». Third step of the podium for Burgundy, with Maldant Pouvelot (Chorey Les Beaune) and Domaine Massin (Chablis).

Also represented were Alsace, Limoux and Provence for France, as well as Moselle for Germany and Weinviertel and Burgenland for Austria. For Italy, well painted from north to south, there is plenty of space for Veneto. Ranging from the Valpolicella of Le Guaite di Noemi to the extraordinary Metodo Classico of Zamuner, without forgetting the Prosecco of Adami (one of the founders of distribution) and the Soave and Lessini Durello of Sandro De Bruno. Passing through the good representation of Barolo, Langhe and Roero (Cravanzola, Ronchi, Alessandro Rivetto and Rocche Costamagna), one touches Montalcino (with Il Poggiolo). And we arrive, among others, as far as Sicily, represented by Vigna Nica’s Mamertino. 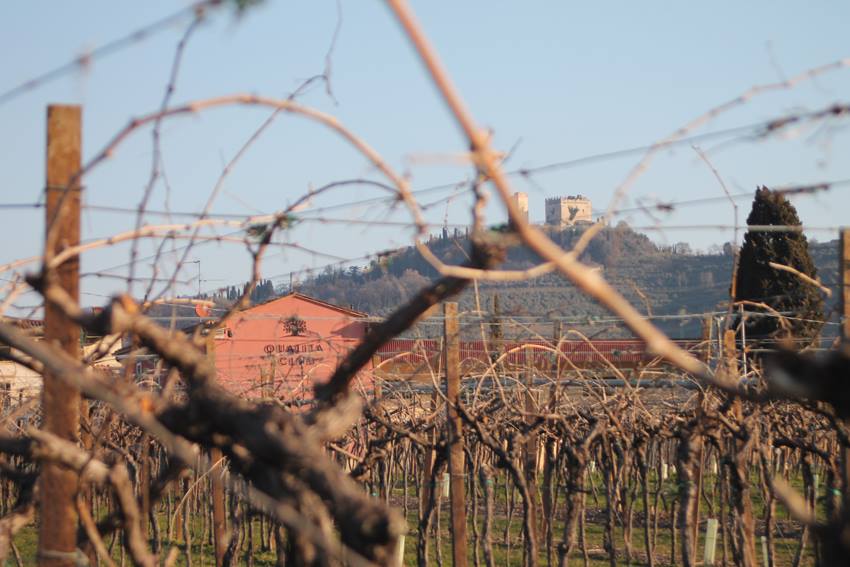 There is a risk of losing one’s bearings among the “goodies” in the Wine & Food catalogue of Qualità Club Selection, united by the common thread of excellent value for money. Here then are some tips among Italian and international wines and gastronomic specialities, tasted in Illasi in the company of Carlo and Francesco Bennati. Among the wines not to be missed is the Trento Doc Brut Nature by Cenci, a winery founded in 2018 by the husband and wife Valentino and Silvia Cenci in the Bassa Valsugana. Great balance and perspective for the Lessini Durello Doc Dosaggio Zero 36 months by Sandro De Bruno. Pure emotion for the Champagne Brut Grand Cru Aÿ 2014 “Cuvée Des Sires” by Roger Brun (70% Pinot Noir, 30% Chardonnay), muscular and at the same time creamy, endowed with great backbone and elegance, in the sign of the Pinot Noir of Aÿ.

“Warning: Not to drink in actress’s boots” and “Best before: your funerals”, reads the provocative (but realistic) back label which, like the wine, perfectly represents the personality of the producer, a rugby fanatic. A passion manifested by the use of an oval ball for Roger Brun’s merchandising. Among the models for this label is none other than Bollinger’s “Grande Année” (at about half the price, but don’t tell people that too much).

A great responsibility lies with Klaus Lentsch, since 2013 president of Qualità Club Selection. His labels fully reflect the distribution’s mission, as well as being faithful mirrors of the South Tyrolean territory between the Eisack Valley, Oltradige and Bassa Atesina. “Weissberg” is the wine born of an intuition: that of vinifying separately a plot of their own Pinot Blanc vineyard, at the foot of the Mendel mountains, with plants of an average age of 45 years. Here, then, is a Pinot Blanc of extreme elegance and strong character, softened by the second passage tonneau. Creamy on the entry, absolute tension and a saline touch on the finish: an already enjoyable wine with excellent potential for long ageing. Looking towards Burgundy, or rather Volnay, the South Tyrolean Blauburgunder Doc Pinot Noir “Bachgart”, a true masterpiece of Klaus Lentsch.

Returning to the whites, given the extraordinary form of the 2008 Cotes De Bordeaux-Francs from Chateau les Charmes Godard, the advice is to stock up (in cartons) on the 2018 vintage, now on the market (63% Sémillon, 21% Sauvignon Blanc, 16% Sauvignon Gris). Quality Club Selection does not fall on the Riesling chapter either. Two wines were tasted, both faithful mirrors of their respective terroir: Bender for Mosel (Germany), with “Zenit Paulessen” 2018; Spannagel for Alsace (France) with Wineck-Schlossberg Alsace Grand Cru 2016. Both very young, with the second one (the “older”), however, seeming to have an edge.

The Barbaresco Docg 2018 from Giancarlo Rocca’s Azienda Agricola Ronchi is also very young but has great prospects. The ‘rabbit’ pulled out of the hat by Francesco Bennati is extraordinary: the Margaux Grand Cru Classé from Château Malescot Saint-Exupéry 1978 (49% Cabernet Sauvignon, 38% Merlot, 8% Cabernet Franc and 5% Petit Verdot) clarifies the meaning of Bordeaux En Primeur. Red fruits enveloped in a very elegant spiciness dominate a sip that seems not to want to yield at all to the grip of time and tertiary elements. Very light hints of undergrowth (mushroom) only partly betray, after several minutes of oxygenation, the age of a nectar that seems immortal, even in colour.

Towards the end of the curtain, nothing better than the Sauternes 2010 Les Carmes De Rieussec from Château Rieussec, with its iodic and saffron notes to match the foie gras from Ambassade Du Terroir, a company located between Perigord and Quercy. For the texture of Turron de Jijona, a typical nougat from the Alicante area in Spain, as soft as it is tasty, the pairing with a distillate is perfect. Carlo Bennati literally hits the jackpot with Dol Gin from Distilleria Zu Plun, the Gin of the Dolomites signed by master distiller Florian Rabanser, in Castelrotto (BZ).

Foie gras and Alicante nougat are just two of the food goodies in the Qualità Club Selection catalogue. Continuing into the territory of sweets, the maniacal care of Bonnat chocolate is also worth mentioning: a long love story, which began in 1884 with founder Felix Bonnat and is represented today by “chocolate scientist” Stéphane Bonnat.

Moving backwards, the selection of cured meats is excellent with the pairing of Salame di Felino Igp and Coppa della Bassa by Salumi Di Parma, enhanced by Cecina De León Igp (rump of beef) by Specialità Spagnole. The availability of fine fish is also varied. To the very Italian smoked salmon trout and marinated char in bite-sized pieces from the Trentino brand Trota Oro (Famiglia Leonardi), there is the answer from Alaska in the form of the load of smoked Sockeye Wild Salmon from I Salmoni Di Valentino (Valentino Ramelli).

Completing the journey back to the “Dispensa” of Qualità Club Selection, here is the Aromatic Black Rice from Pila Vecia (Isola Della Scala, Verona), the oldest working rice husking plant in Italy. Perfect for the preparation of appetisers is the Veg Mayonnaise with Paccasassi from the Marche company Rinci, a perfect marriage with Costera‘s Anchovies from the Cantabrian Sea (anchovies from the Cantabrian Sea), imported from Illasi distribution since the 1990s, when they were not yet “fashionable”.