Fifty years of Australian Chardonnay in 8 labels: the “days of wood” are over

It was 1972 when Australia‘s first ‘pure’ Chardonnay made its market debut. In fifty years of history, Australia’s most iconic white wine has moved through fashions and trends. It has been caressed by butter and the toasty notes of French Chardonnay, aged in wood. Today, it leads the international market with its own recognisable style.

A middle way between the frank freshness that distinguishes other white grapes known to the world public (such as Sauvignon Blanc or Chenin) and the aristocratic elegance in the use of wood. It becomes a “container” again and stops being an “ingredient”.

This is the impression given by the 8 Australian Chardonnays tasted with Wine Australia on the afternoon of Tuesday 5 April. The way chosen to celebrate with the international press the 50th anniversary of the first white varietal produced and marketed in the country.

A slow journey that began in 1830, when the first Chardonnay vines began to be “domesticated” in the many terroirs of Australian wine.

This brought us to the 1990s, marked by the reign of barrique vinification, now a legacy of the past. In their place, Chardonnays that favour territoriality and refinement. A balance between fruit, tertiary and ageing potential.

Its popularity may have risen and fallen over the years,” emphasised Mark Davidson, contact person for Wines of Australia, “but one thing is certain: Australian Chardonnay is a legend with a bright future.

Davidson led the digital tasting of the 8 Chardonnays chosen to celebrate the 50th anniversary, together with MaryAnna Worobiec (Wine Spectator) and Oz Clarke Obe (British wine writer and television presenter).

Hundreds of Australian wines are being tasted today in London for the press and trade at the Royal Horticultural Halls (Westminster), another event that winemag.it is following in presence from the UK capital. 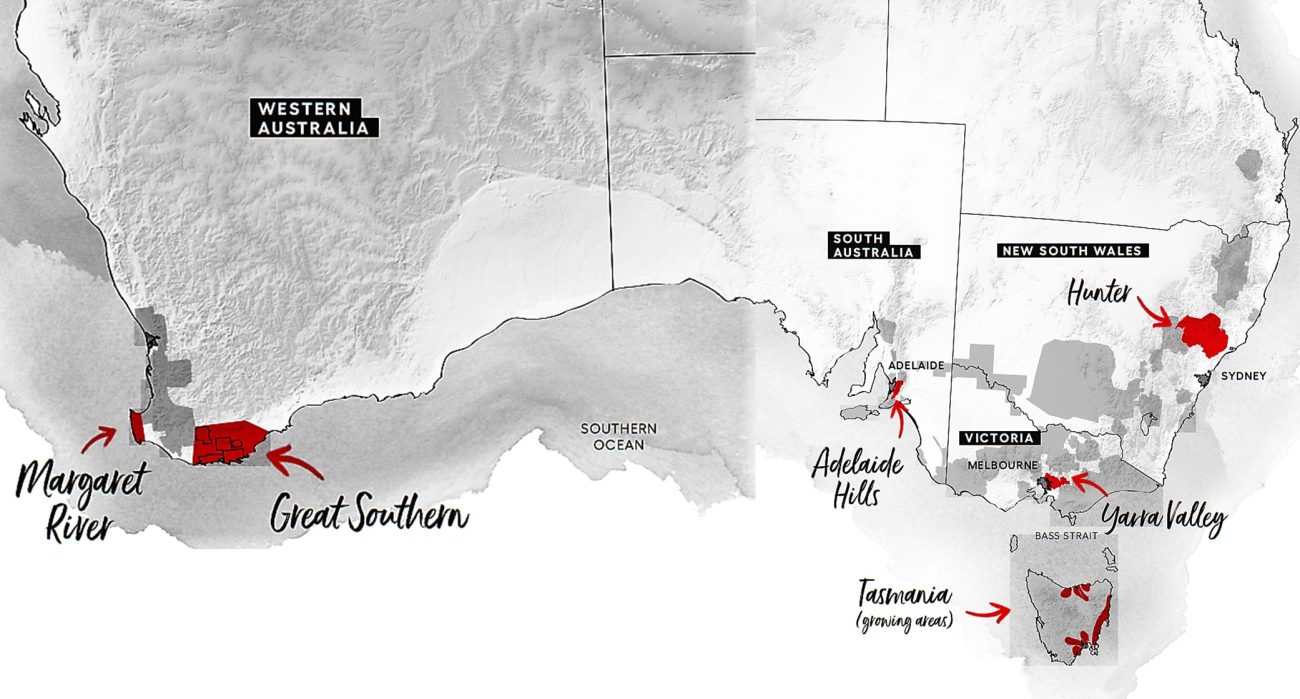 Chardonnay and its Golden Jubilee cannot fail to be among the great protagonists. Chardonnay is the most widely grown white grape variety in Australia, in 58 of the country’s 65 wine regions. It is second only to Shiraz and continues to be the most widely exported white wine. Wine Australia estimates that 3.8 million glasses of Australian Chardonnay are enjoyed overseas every day.

There are many styles, mainly due to the different climates in which the grapes ripen. They range from western Chardonnays, particularly Margaret River Chardonnays, influenced by the ocean, to subtropical Chardonnays such as Hunter Valley in the east.

The variety reflects local characteristics wherever it is grown,” Mark Davidson pointed out, “and is produced in a range of styles from light and crisp to full-bodied and complex, barrel-aged.

Another discriminating factor, evident in the tasting on Tuesday 5 April, is malolactic fermentation. Chardonnay lends itself to being taut and very fresh, without having undergone a “second fermentation” during vinification. Or softer, when the malic acid is transformed into lactic acid following alcoholic fermentation (usually in spring).

A beautiful straw yellow colour to the eye. Wood present on the nose and in the aftertaste. Melted butter, vanilla and honeyed notes are among the descriptors useful in understanding the nature of this label, characterised by good freshness and a tendentially soft but dry finish.

We move south-east, to Margaret River to be exact. Chardonnay from the Gingin clone, harvested in mid to late February 2018 and bottled on 26 August 2019. Fermentation in barrels, 100% new French oak. Maturation of 11 months in new barrels of the same material. Malolactic fermentation not carried out.

Straw yellow in appearance. Splendid nose, with much more gentle wood than the previous sample. Perfectly ripe tropical fruit, never smudged. It is striking for its precision and focus on the fruit, combined with a vibrant, citrus freshness.

Returning to the use of wood, there is a dose of melted butter. But the acidity ‘dries’ it out and makes the fruit even crisper, pulpy. Closing in the middle of the mouth: dry, citrusy. A wine area to treasure, Margaret River.

Back to the south-west, to the Great Southern wine region, another cradle of Australian Chardonnay. The clone remains the same: once again the winery’s choice is Gingin. Harvested on 24 February, bottled in December 2018.

Spontaneous fermentation with indigenous yeasts in 225, 300 and 500 litre French oak. Maturation for 9.5 months in oak. Less than 5% malolactic fermentation. The nose is clearly different from the previous samples. It is less broad and the wine seems contracted, initially reduced.

Then comes the fruit that has yet to explode in maturity, amidst precious green notes reminiscent of citrus peel (lime, lemon) and the flesh of a white peach. In the background is a touch of ginger. On the palate, as expected (and expected): an important acidic structure for a Chardonnay supported by an important freshness, around which exotic fruit plays a fundamental role.

It is there. And it is appreciable, even though it is “fresh”, not very glyceric, not at all soft. The world is full of ‘empty’ wines that focus only on acidity, especially in the vinnaturist world, characterised by indigenous yeasts and spontaneous fermentation. Here, freshness becomes the tool and the manifesto of a masterful grape harvest, aimed at giving a touch of personality to an unmistakable and long-lived wine.

We move on to an expression of Chardonnay that combines grapes grown in three areas: Tumbarumba, Adelaide Hills and Tasmania, between the small Australasian island and the ‘mainland’ part, to the south west.

Harvest completed from March to April 2019. Fermentation (alcoholic and malolactic, full) 100% in French barriques, where ageing also takes place (8 months, 35% in new French oak). A wine that changes a lot depending on the serving temperature, characterised (at the correct temperature) by oenological precision.

Fruit and freshness share the stage equally, with a particular accent given by the hard, basaltic soils of the first two zones. The wine is taut as it enters, with hints of wet stone, melon and white peach, before softening on the finish.

State of Victoria, just a few kilometres from the city of Melbourne. This is where the Mornington Peninsula, from which Moorooduc Estate’s grapes come, is located. Harvesting took place between 26 and 28 February for clones I10V3, 95 and 96 (Robinson) and bottling on 14 January 2019.

A wine that stands out completely from the rest of the samples tasted for the 50th anniversary of Australian Chardonnay. The starting point is a more golden yellow, a far cry from the previous straw hues. A slight oxidative streak for a wine that is broader than taut. There is some nice citrus on the finish, giving some backbone to a taste that tends to be dominated by ripe exotic fruit.

We remain in Victoria, but move away from the city of Melbourne, about 100 kilometres from the Giant Steps vineyard. A cool area, influenced by the currents of the Pacific Ocean. Spontaneous fermentation for the Chardonnay grapes harvested between February and March 2021, with bottling in October.

The winery’s choice is for French oak, but only 15% is new. The wine is matured for 8 months in French oak barrels, again only 15% new. Only 10% of the mass underwent spontaneous malolactic fermentation.

Unlike other Giant Steps labels, this wine is not from a single vineyard. To speak of “entry level” is wrong, however, as this is a sought-after expression of “synthesis” of Yarra Valley Chardonnay: a wine that synthesises its character. Mission accomplished, judging by the glass.

This Chardonnay is a delightful combination of fruit and acidity, with the latter acting as the backbone, while all around it there is mouthwatering fruit. The mere 12.5% is surprising because the palate is full: a perfect balance between freshness and a silky, ‘glyceric’ vein. An “immediate” wine, skilfully crafted. The finish is dry, with a slight hint of liquorice stick and salt, calling for the next sip.

The Adelaide Hills are one of Australia’s massive Chardonnay production areas. We are still in South Australia, not far from Melbourne. Specifically, the harvest of clones B95, B96, B76 and 277 took place in March 2020 and the nectar was bottled on 1 February 2021.

On analysis, a wine characterised by a rather full expression of fruit, both on the nose and on the palate. Good citrus freshness to counterbalance the glyceric vein. Speaking of alcohol (13.5% vol.), the component disturbs a little on the finish. A simple wine.

We flew to Tasmania for the last sample chosen by Wine Australia to celebrate 50 years of Australian Chardonnay. Several clones were available from Tolpuddle Vineyard, a winery in Richmond, north of the capital Hobart: B96, I10V1, I10V3, 76, B95, G9V7.

The grapes were harvested at the turn of March and April 2020, with subsequent bottling in June 2021. Again, the producer’s choice is for spontaneous fermentation in French oak barrels, one third new. Malolactic fermentation is carried out entirely.

Yet this wine vibrates with freshness, right from the nose. This is thanks to the mountainous climate of the Coal River Valley, cool but sunny and dry. A new happy island for Australian Chardonnay. It is convincing for its layered bouquet, which opens up in all its fullness as soon as the puff of melted butter gives way to white flowers and crisp, full fruit.

In the mouth, an electric acidity, well balanced by returns of perfectly ripe fruit, which denotes the wisdom of Tolpuddle Vineyard in choosing the perfect time to harvest the grapes. Almondy veins on the finish smooth out the biting acidity that characterises the citrusy sip. The finish is long, precise and dry, for a wine that never tires. And it has an excellent chance of further, positive refinement.